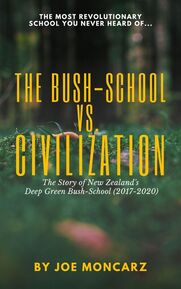 The Bush-School vs. Civilization: The Story of New Zealand's Deep Green Bush-School
The book I didn't want to write and don't want to publish.  Read all the details of the short (but drama-filled) existence of the Deep Green Bush-School in my now-completed book.  A look at the strengths and weaknesses of the DGBS school model, the personalities involved, and how it all played out, as seen through the lens of the Deep Green Bush-School anti-civ philosophy.  This is the story of a beautiful school philosophy and the attempt to implement it against various challenges, including being bullied, manipulated, and deceived by one parent for the entire run of the school.  Other challenges included a kaleidoscope of sometimes-questionable parents, hostile neighbors, a Ministry of Education which enables bullies, and a ridiculous ERO (school inspection) system.  Whatever you've heard, be prepared.  More than just opinion, details in the book are backed up by undeniable and unambiguous forms of proof.  There are many lessons to be learned - not just about running a school, but about relationships, about parenting, about human behavior, and of course, about civilization.
[Note: I put publication on hold for now.]

Civilization is Coming for You! Ending Civilization Before it Ends Us  [working title]  This is an anti-civ self-defense manual.  A way to understand and defend ourselves against civilization.  Outlines the process of de-civilizing the world. Civilization is an idiotic social arrangement in all possible ways, including making most people miserable, and destroying life on the planet.  Come on, we can do better than civilization.  [Due late 2022]
Proudly powered by Weebly